For the 30th anniversary of the Alpine Ski World Cup Alta Badia – Dolomites, artist Daniele Basso – creator of GIGANT, which stands at the top of the Gran
Risa slope – has chosen Swarovski® Crystals to adorn the trophies for the 2015 edition of the Giant Slalom and the very first and innovative Parallel Giant Slalom. 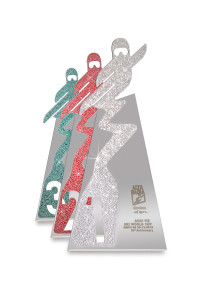 “Trophies – says Daniele Basso – that metaphorically tell a story, which starts at 2100 meters, high above Piz la Ila, where the dream of every athlete and ski enthusiast begins and unfolds on the purest crystal snow of the Gran Risa, and the performance that determines the standings at the finishing line is unleashed…”

True works of art that interpret the logo of the Alpine Ski World Cup Alta Badia – Dolomites, one of the most spectacular white circus competitions, consecrating it in steel, brightly studded with crystals.

“And for the first time – continues Basso – the trophies are all the same size to celebrate not only achievement but the Universal value of Sports as well… When determination, talent and passion push Man and Mankind towards new goals!”

The idea to use Swarovski® Crystals originated not only to be consistent with the faceted shapes, the formal signature of the artist and of GIGANT, but also for the innovative content of a combination that began back in 2011, when Daniele Basso became the first to pair them with his preferred material: polished steel.

Entirely eco-sustainable, both materials are eternal and, through the light they reflect and amplify, they experiment with an ART that is ethical and responsible for man and for the environment, and celebrates the values of Humanity that believes in the force of life.