Marco Canova was born in Biella in 1977 and lives in London. He’s been scholar of Piera Bertarello, known painter , and later of visionary painter Antonio Massari resident in Milano since the 70’s. He also studied painting in Brera.  Numerous are the expositions cooperating with studio D’Ars in Milano and with other galleries with which he works. He has also showed his works throughout Italy and abroad. He studied painting in Brera. 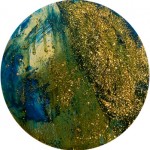 “Contorted and controversial, feelings fall from colors of his paintings illuminated and composed. Few words, just like his being. An explosive impact.”