Almost as a joke, for fun!

“Since I was a little boy, I was fascinated by this world of different people in the seaside town selling their creations, telling of their trips, comparing worlds so far apart, a tangle of feelings, of languages, of different ethnic groups, cultures, of sensations perceived by the first approaches with artisans of the road, people living squares, streets, beaches. Dreams that led me first with the imagination and then with the 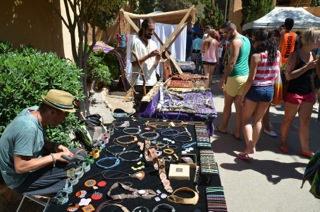 initiative to travel the world, eager to learn new things, far and different from the small world of every day. The first trips to London, then the Canaries, and in late 2003, to find a love, I left for Colombia, where I learned the basics of a technique invented by the ancient Arabs around 1600: the macramé, structured weaves and knots the combination of which allows the mind to wander without constraints and achieve creations of forms and colors, always innovative. The passion transmitted by two Colombian artisans and my experience in Ecuador and later to the extreme south of Tierra del Fuego, they brought me in contact with new traditions and different schools of thought, which are intertwined with the heritage of my European culture, inspired in the expression of a sequence of nodes, as if to find the meeting point of diverse cultures, wanting to unite disparate worlds. In nearly three years, I have developed my skills in this art that requires long hours of manual labor, a lot of patience and a continuous research in the enrichment of their creativity.
It ‘a journey that never ends, boundless and ideological.”