A life for art

A good thirty years have passed by now since Giuseppe Corrado’s first naïf experiences happened and many trials were faced and brilliantly gotten over: school, apprenticeship, the assimilation of models, the research of his own language and also the achievement of some substantial renown. Very numerous critical voices, too, have recognized the artistic value of his works and this not only in Italy. Splendid is the opinion given by Helen Mirren. The confirmation comes from a prestigious cultural acknowledgment awarded in June 2012 in Paris, a city evoking, at a planetary level, suggestions of excellence in the field of arts, creativity, culture and research. Here, during a solemn ceremony, a Diplôme de Médaille d’Argent was in Art was awarded to him and, in the same time, he was recognized as the best Italian sculptor alive. The prestigious prize is the result of a careful selection made for a long time by experts from the Societé Académique d’Education et d’Encouragement “Arts-Sciences-Lettres”. Giuseppe Corrado was born on 1 January 1960 in Montesano Salentino, Province of Lecce. Here he lived with his family and attended elementary and middle school. At the age of 14, he entered the Secondary School of Art in Lecce, where he got his Degree and later he decided to enter Physical Education Science University in Foggia. After getting this further qualification, for a short period he started the school activity as a physical education teacher, but that inner creative frenzy that he experienced as a principle of an overpowering pleasure, drove himto leave school.

Thus, he made the choice of a radical and certainly nonconformist life. As it is evident, in this choice there is a very strong will to transgress and break,but also an unshakable trust in his own artistic abilities. It is a choice that involves completely his family, starting with his splendid wife, Anna Maria, and his four children. In a very short time, he made clear, first to himself, which his aptitude inclination was and for this reason he decided to dedicate himself essentially to sculpture. He did not hesitate to turn back to study Art. He studied the Greek and Latin classics, the medieval iconography and the Italian Renaissance, however without consecrate the tradition in dogmatic theories. He began to be interested also in avant-garde and experimentation, but avoiding the easy enthusiasm of conformism and trendy. He read a lotand followed the modern debate on art, the extreme thesis of different schools and many polemics that resulted from. His favourite author is Giulio Carlo Argan. Giuseppe Corrado is an artist that knows how to match the cosmopolitan opening of his sculptures with the steadiness of very deep anthropological roots. For this reason the Mediterranean and the World appear to him as two interchangeable dimensions and, in both of them the negative existentialism of the human condition is housed . However, it would be wrong to think that theroots myth is experienced by Giuseppe Corrado as an hermetic entrenchment in a non-historical vision of that cultural symbolism that is anthropologically tied to the Mediterranean civilizations. 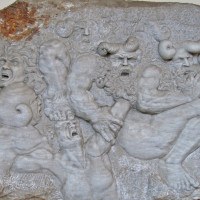 He has got a view of art so opened that his need of conviviality among cultures has led him to consider the space Mediterranean-World as the more suitable one to show his works, letting that they release emotions in the receptive capacities of such different people. Giuseppe Corrado is a cosmopolitan sculptor for having brought a message of critical thinking and peace in so many places of the world, from the most important Italian and European towns to Hong Kong and the South Africa. Famous, in this sense, is the big wooden Gesù (Jesus), given in 1994 to Pope John Paul II and the hug with Nelson Mandela, in 1998, to whom he presented with one of his important works titled Sole salentino (Salentine sun). He feels he belongs to a world wide agorà and the same existential problems of his sculptures feed on the trampled expectations of a such audience. Giuseppe Corrado is an instinctive sculptor, from time to time he shows his creativity with a wild spirit. For this reason, he seems to be an anarchic artist. When he guesses the enterprise, he focuses the process, lets himself go and follows thousands of suggestions of a fantasy that does not want to stop and begins fighting with the material in the most unthinkable time of night and day. As if it was a challenge. And, however, the anarchy is bound to be extinguished, always in the same way, that isthrough discipline, the mental plan, the rational drawing, the rule and sense. And even when a cry of rebellion seems to come from his sculptures against the established world and the ordo of things, thisprimordial Dionysian impulse goes to search the same elements of self-discipline. His dearest models are Michelangelo Buonarroti, for a long period of his activity and Albrecht Dürer (more recently), therefore the Renaissance styleand that Baroque and allegoric one, placed on an absolutely paradigmatic level; but in Giuseppe Corrado also the Greek sculptors of antiquity and the Christian art, the medieval Gothic and, sometimes even a neoclassic sense of measure with a matrix of the XVII century, have got a great importance. Not even the suggestions coming from the twentieth century experiences of avant-garde are few. His openness about experimentation is constant. The figurative art is contaminated with the surrealism, the abstractionism, the conceptual and the postmodern art. In 1990, at the age of thirty, he was appreciated in Rome thanks to two personal exhibition and in one of them he gained the Prize Leonardo da Vinci. Since then, he has traced a formidable course of exhibit activity in Italy and abroad: since 1989 to 2009 he has been continuously present with at least 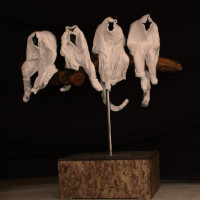 four or five stages every year. He exhibited in Milan, Florence, Modena, Ferrara, Padua, Brindisi, Teramo and Catanzaro. Giuseppe Corrado is very active also in international exhibitions. Since 1990 up to 2008 he wanted to bring his sculptures in other ethnic cultural and national contexts to satisfy that need of existential dialogue and cultural interaction, mentioned above. In 1990, he exhibited two times in Germany, at Stadthlle Fùrth and Stadthlle Monaco. In the first, he returned in 1991 and 1993, in the second one in 1992. For four years running, since 1994, he exhibited in Hong Kong at The Ritz Carlton. In 1998, he decided to exhibit in Johanesburg, South Africa, but he returned also toHong Kong, where he exhibited in the same previous location. In 2004 he was at Marbella, Spain. Later on, he decided, after over ten years, to come back to Germany. In 2007, he exhibited at the “Markus Tollmann” gallery in Dusseidorfer, and in 2008 he was in Cologne and Monaco. Giuseppe Corrado is very known for an extraordinary work dating back to 1999 that is La coscienza (The conscience). It is a monumental work, in steel and plaster, 170 cm high, that many people quickly (but rightly) call the devil. The extraordinary thing of this work is the fact that, with immediacy, it produces an experience of choc, from the emotional point of view, for those who watch it and, subsequently, an intensity of emotions that almost makes the subject feel the evidence to be assaulted by ineffable evil that would have never thought to possess. It is that sinister and ambiguous fascination typical of the sacredness that tremendous and terrifying things emanate. The work represents the humanization of evil, therefore, from some points of view, it transplants the satanism in each one of us on the basis of that negative existentialism that considers life as a Manichaean fight between good and evil, in which it is easier the evil triumphs over the moral virtues than the contrary. Giuseppe Corrado’s interest is more in the sacred than in the faith or orthodoxy, so the two times (Hellenism and Christianity) reappear, cyclically, without the overcoming of the one or the other, indeed, sometimes, they are mediated in an aesthetic hybridization that, apparently, seems to dissolve them, but in fact it holds a polysemous process of signification. The existential problems are often conjugated also with the taste for grand masses, emphasized muscular structures and the tendency to use hyperbole in the reation of the human figure, but often the divine figure too are conceived in the same way. In this style, apart from the ancient Greece influence, it can be easily noticed that one referring to the Renaissance poetics and to Michelangelo himself. But this tendency has nothing to do with  he monumentalism celebrating so much Fascist architecture. Monumentalism is certainly a fact of culture and taste, but in this case it belong to Giuseppe Corrado’s nature, in which the raptus of the sculpture activity takes the shape of an instinctive vital force that gradually satisfies his principle of pleasure in the process of moulding matter and building sense. From this point of view, it can be considered as an intense 9 metaphor of life, still menaced by the principle of reality and exposed to risks impending in any case: that is a life conceived as a fight and agon. In his works it is never represented the idolizing of an Eden beauty and dispensing happiness because the Olympian harmony does not belong to this world neither to this humanity. In them a permanent tension prevail, if anything, and in Giuseppe Corrado’s masterpieces beauty takes the shape of tension, of an unsolved drama. Achille, from this point of view, is really a masterpiece as well as La coscienza. In this sculpture the figure of Achilles is seen according to the canon of the Renaissance classicism, revised from a vitalistic perspective, but his matter is shown in a such tragic way by the salentine sculptor that it expresses the human precariousness. These are the main problems to be codified in Giuseppe Corrado’s sculptures. They can be found out in the clay and olive-wood works as well as in others structured in materials like natural stone, Lecce stone and Carrara marble. But these are just a part of the materials used. The different seasons of his artistic activity are as much important, in each one a specific style is expressed, but always related to other tendencies. Analysing them one after the other, it is possible understand his art evolution that seems to me to have a multi-style nature. To understand the multi-style, we must refer to Gianfranco Contini who, to explain the language 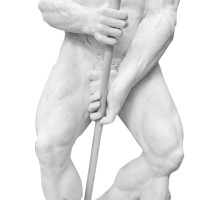 built by Dante Alighieri, uses this word, indeed he creates it. Giuseppe Corrado works in a similar way. The principle of a continue opening towards a lot of styles and expressive tendencies that are integrated and contaminated with a great voracity for new experimentations, is simultaneously followed by a principle of selection and synthesizing of those codes used that transmit to his art a mean of unmistakable originality, and in the same time, free it from heterogeneity and eclecticism. His monumental clay works, in neo-Renaissance and Baroque style, ball-shaped, figurative and abstract, sacred and mythological, Christian and unreal make up a complex plot of that multi-style, always in search of a sense that could perfectly express the human odyssey. This complexity, however, is always skilfully carried to an unicum, done with aesthetics and ethics, technique and learning, shapes and critical reflection about the world. The last few years, meditating upon the pleurantes figures of French medieval Gothic art and integrating them through the multi-style method, he has been working to an allegoric line of sculptures that are of extraordinary artistic importance. Some already attained results attest this in an unmistakable way. And yet, although this multiple frenzy of combinations, the impression we receive from his sculptures is always an unicum of aesthetics and sense. Just a great artist can do so much.