Giovanni Bonaldi was born in Serina (BG) – in 1965, where he lives and works. After a first cycle of studies at the State Art School of Bergamo, he graduated NABA in Milan during painting in 1987. In the next academic year, he was appointed assistant of Gianni Colombo during Structuring of Space at the Academy of origin. Since then she carries out its research activities in the visual arts articulating its contents with the texts of Jewish mysticism. He collaborated with Snowshoeing and Roberto Sanesi, Alberto Fiz, Carlo Pesce, Nadine Shenkar, Martina Corgnati, Silvia Gervasoni, Beatrice Resmini, Elio Carmi, Elena Di Raddo, Federico Sardella, Chiara Mari, Sara Fontana, Emma Panza, Riccardo Barletta, Mons . Gianfranco Ravasi, Rav Elia Richetti, Francesca Ruth Brandes. 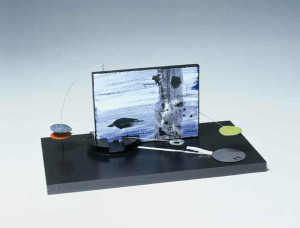 Alternated collaborations with museums specifications: MEB Bologna (2004), the Museum of Lights of Casale Monferrato (collaborations 2003-2013), the Jewish community of Venice – Scala Mata Gallery (2008). Since 2010, Arturo Schwarz takes care of his work by presenting a Book of artist at the Contemporary Art Fair of Bergamo and Mudima Foundation in Milan in 2011; Casale Monferrato at the Jewish Community in 2011; Castel Rozzone in the exhibition hall, in 2011; at the headquarters ASAV to Seriate Town Hall (2011) and in the Collective Gallery Peccolo Livorno in 2012. Also in 2012, Arturo Schwarz wrote the critical essay for the exhibition “… not sleeping Sleeping Beauty” at the Gallery at Viamoronisedici Bergamo and the Cloister of SS Trinity Serina (Bergamo). On 11 February 2014, the Foundation Mudima, Gino Di Maggio, Arturo Schwarz, Jean Blanchaert and Gianluca Ranzi, promote its “Tzlil – Sound” with this edition.