Born in 1971 in Biella, Italy, Lorenzo Puglisi lives in Bologna.His work is based on portrait painting, the result of a long journey towards the essential of the representation and full of references to the history of oil painting. The strong interest in human nature and therefore in the mistery of existence are the main issues for his research and the obsessive urge towards the attempt to portray it.

Painting and its spirit
by Valerio Dehò
There is a painful form of painting that reflects itself in the tension of the forms with a sort of spasm that contracts the colour and makes the brushstroke disappear into a sedimentary texture or into a magma-like deformation. A universe of feelings and thoughts manifests in a sort of hyperbole of existence, in a concentration of painful and unbearable life. Almost as if every elementary particle of the painting becomes heavy as a stone, dense as pitch. Lorenzo Puglisi, although very young, practices a form of classical expression that we can call adult.
He not only prefers, among artistic genres, the portrait, but above all he confronts himself with those “genres”, those forms crystallized over centuries through reiterated teachings which have brought about some criteria of realization called canons. But Puglisi’s work is not about evading the furrow of tradition or denying it. Rather he is seeking to affirm the oneness of the self. The formula of the English philosopher G. Berkeley, “Esse est percipi”, is apt. The sense of his hard portraits, often unadorned, to the limit of consumption, it is really a principle of existence that cannot be denied. And this principle of existence consists really of being perceived.
Painting and its spirit, the reality, are not then to be seen as an absolute truth, but as a mutual ontological attestation. Painting is the key to this relationship because it reveals the inexpressible, it espresse the unrevealed, it reveals the plot of the world underneath the realm of appearances. Puglisi has this ability to look beyond the veil of Maya, but he does not make the error of revealing its truth. He knows that painting is pretense, propaedeutic to an uncontaminated and subjective world. It is the light that gives existence, while the truth, shrouded by metaphysics, is always situated beyond. Lorenzo Puglisi covers in the man the physicality of the Earth, of the dark and heavy forces that retain the gravity of the soul, according to the philosophy of Martin Heidegger. And his is a method because he does not expect to enter into close or affective relationships with the people portrayed. It is rather his way to look at the world that allows him to give existence to a people of enigmatic and deep figures. The young artist is endowed with rare introspection and in faces he looks for that loneliness of the form that all great painting has always pursued. The eyes, as in Francis Bacon, no longer have the function of “window of thesoul” that they could have in the classical portraiture at least up to the 20th century. They are often eyes that do not look, perhaps because “they are looked at” and therefore they maintain a passivity in the relationship.
Or in some cases they are absolutely blind: they are voids that won’t be filled if not with what they
don’t reveal. They are one of the so many elements that characterize a face, but the perception is total, a sort of sum of all the parts without any hierarchy. And what is returned to it is an existence, Puglisi completes a journey inside the person that has a return in the painting, that escapes the hidden dangers of the ghost to arrive only and strictly to the values of painting.
Another important aspect of these works is the choice to bring the representation in a non realistic
sphere, and realism is the estrema ratio of a voiceless art, without aspirations towards the metaphysical silence. This is instead present in Puglisi because the faces are rarely supported by a body, less and less evident and important, they are the absolute protagonists of a path that leads beyond the canvas and beyond the look. The colours themselves have a fossil texture. They appear evaporated and inert. They are flocky and palpable as improper thoughts. We understand how the artist gives a plastic thickness to his painting, that is not only far from realism but also from naturalism.
A last theme to be faced is the one related to distance. Every artist has his own distance from his
subjects, especially in figurative art. Lorenzo Puglisi does not use the painting to fill this distance, but in a certain sense he gives knowledge and measure of it. Not only do the people portrayed not receive any mention in the title, but they exist as works of art. All the portraits simply have a classificatory number, a label that does not want to memorize an event, a date, a meeting. It is only a technical sign, that increases the enigma of the painting and marks the distance, the perception of a space to overcome, not of a void. And in this young painting, complex and highly reflective, important results can be obtained: there is enough material for other paths, for other acknowledgements, for other paintings.
Perhaps this is the value of the artist who does not consider himself to be something other than himself and populates his world with a gallery of fascinating and solemn portraits, to which only the painting knows how to give life. 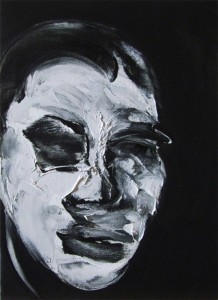 “The painting of Lorenzo Puglisi is centered on the portrait: oil on canvas of matter are organized like a saber, the action removes or conceals a mysterious presence.
Figures that exude moods.
Quality and pictorial intelligence try to contain immense energies enclosed in the depths of man. The artist faces the big lesson from Caravaggio to Bacon and Freud expressed through painting the critical nature of the human being. “

“After the success to ARTVERONA 2011, ended October 27, at the Galleria Grossetti, exhibition presences, Lorenzo Puglisi, the gallery in Milan from July 21 this year. To conclude the exhibition, Bruno Grossetti wanted to invite public and critics to celebrate the 40th anniversary of the artist from Biella to finissage. Lorenzo Puglisi, born in 1971, has indeed something to celebrate: the result of the excellent exhibition Grossetti and critical acclaim achieved by the six paintings on display in Verona, the ‘year of its fourth decade has reserved great satisfaction. Since 2002 the exhibition history of Puglisi – after years of training around Europe, including Copenhagen, Amsterdam and London – passes for personal showse group in Italy and ‘abroad.
Through his work, Lorenzo Puglisi shows a thorough knowledge of art history, which manifests itself in his paintings in citations and echoes of the great portraiture, with a particular fondness for the experience Fauvese for master Francis Bacon. The brushwork hard Puglisi, compared to Bruno Grossetti a “saber”, and the expressiveness of his characters, outlined with a few basic traits, reveals a study portraiture that is in the model Baconian a great previous.
In the portraits of Lorenzo Puglisi’s faces painted figures emerge from the canvas through the use of the oil technique, which reveals a stark painting in warm earth or in those icy gray. Where necessary, the two-tone gray or brown is interrupted by tears, red amaranth or collar very white robes; all strictly accompanied by a black backdrop, worthy of the masters of the seventeenth century. Bacon not only then, but also Rembrandt and the Flemish lesson, learned by the artist during his stay in the Netherlands. In deformed faces and bodies vanishing portraits of Lorenzo Puglisi, it sees the existential anxiety that is unprecedented in the memory only in those great masters of the last century, which inspired the art of the young artist and Piedmont that have sanctioned its success in recent exhibitions in the newly completed and Presences.