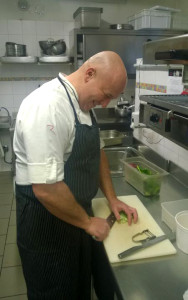 After attending the Institute Hotelier G. Pastore of Varallo Sesia it fits on the staff of the second local ownership ‘of the family, Charlie in Vercelli for 6 years. From 1992 to 2001, Christian’s mother and brother calling to Biella to conduct the Winery “BON TON” the kitchen is simple but sincere and focused on quality and now is reported as one of the first from Gambero Rosso. In 2004 the second passion besides cooking the malt distillate becomes reality ‘is published by De Agostini “The Complete Book on whiskey” signed by him. The turning point, opening a place where Cristiano can ‘create his works gastronomic high quality: the “Osteria Rosso di Sera” in Castelletto Sopra Ticino Novara. Still with great satisfaction plays with great creativity and passion his art at his restaurant. You can see photos of the dishes and see the critical acclaim of the best national newspapers on the site.